Logging and graphing an autonomic response

Originally I had wanted to measure my galvanic skin response (GSR) while watching television to see if there was a correlation between my hand-sweatiness and movie drama. For the data logging/graphing assignment, I opted instead for my finger temperature. I frequently have ice cold hands and I wanted to see if there was a correlation here as well, perhaps to the media I was consuming.

I purchased a GE MA100GG232C thermistor (data sheet) for this purpose, with a range of 32-122ºF. I couldn't get accurate readings at first so I calibrated it through a system of my own devising, using data points for ice water (< 32ºF), internal body temperature (98.6ºF), and boiling water (> 122ºF). The collected data for my middle finger is displayed below, with error of ±0.36ºF. 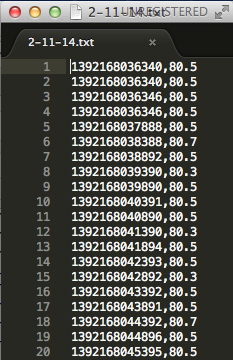 Data points of note include:

The data suggests that, though my finger temperature continued to drop throughout the night, watching The Broccoli Wad on Shark Tank may have slowed the decline. Ambiguous conclusions can be drawn about the Olympics portion of my viewing, but it seems clear that the beginning of the figure skating caused a noticeable increase in temperature. Additionally, I thought that eating something would increase the temperature, but it actually decreased it quite a bit.
Posted by Abe Rubenstein on Wednesday, February 12, 2014

Email ThisBlogThis!Share to TwitterShare to FacebookShare to Pinterest
Labels: Rest of You