During class we took a tour of NYU's Advanced Media Studio (AMS) and their 3D printing systems. We saw some models produced on the various systems, many of which were printed in 24-bit color. They have MakerBots, of course, but they also have some "professional"-grade laser printers including the ProJet 7000 which prints at a resolution of 4,000 layers per inch. 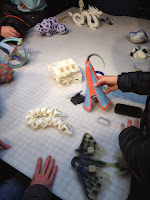 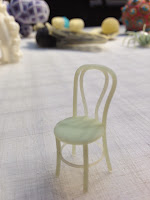 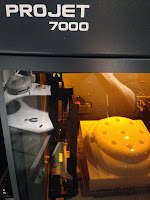 After we returned to ITP, Peter pulled out some aerogel, which was truly incredible. It feels like styrofoam but weighs almost nothing, and is semi-transparent. It was probably the strangest material I've ever seen and touched, and I couldn't stop taking pictures. Neither could anyone else. 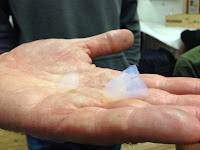 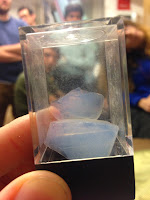 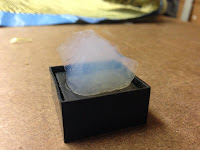 Posted by Abe Rubenstein on Friday, November 22, 2013 No comments:

I received my experience invitation from Jason Sigal back in October and had yet to go through with it. Today I decided it was finally time for action, so I took the F to the A out of Brooklyn and arrived blocks away from the World Trade Center PATH station, the first stop on the journey.

Jason provided a series of audio tracks to accompany different parts of the experience. I was impressed by the production quality and appreciated the minimalistic sound design he used combined with his own voice, giving me information and instructions. 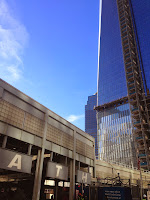 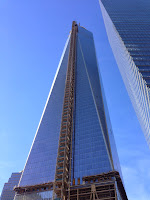 I arrived at the PATH station but it was impossible not to stop for a moment to take in One World Trade Center. Because of its height it was literally impossible to capture the ground and the top of the building in a single frame. Jason's helpful narration assured me I was in the right place, and guided me into the station so that I could catch a PATH train to Exchange Place, in New Jersey just over the Hudson River.

At times Jason included sounds that he himself had recorded in the exact same location, and it was strange to hear recorded sounds that matched the environment I was in, but that did not match temporally. Also, his narration invoked imagery of a friendly futuristic robot, as did the minimal sound design I mentioned earlier.

There was a track meant to be listened to every place along the way, including in the PATH train, and on the escalator exiting the Exchange Place station.  Above the escalator there is an installation of neon lights by the artist Stephen Antonakos, which I found rather uninspiring.  I appreciated Jason's curation of this exhibit, but I felt that the lights did not do anything for the space; they seemed haphazardly arranged and lacked cohesiveness, mostly relying on the shock value of neon in a public space. 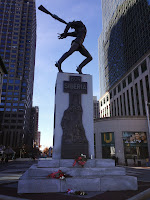 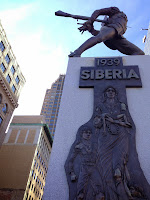 After exiting the PATH station, I was directed to the Katyń Memorial, a statue memorializing Katyń massacre of 1940 in which the Soviets murdered around 22,000 Polish prisoners. There were flowers on the steps of the monument, and I witnessed at least one person cross themselves as they paused to respect the victims. 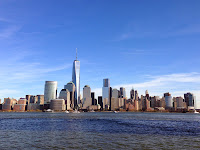 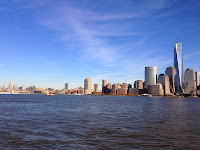 Looking back over the Hudson River gave me an amazing view of downtown Manhattan. I may have put this experience off for far too long but I was glad that the day I chose was bright and crisp, though cold. It was interesting to compare One World Trade Center to the Empire State Building (seen in the second photo above).  The difference in distance makes it appear even smaller than it actually is compared to the newest addition to the city's skyline. 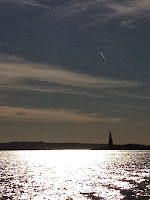 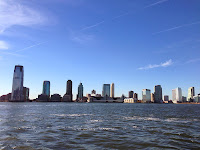 Jason provided me with a ticket for the NY Waterway ferry between Exchange Place and the World Financial Center ferry terminal. He also included music for the ride. I was instructed to look for the Statue of Liberty, which I found directly in the beam of the setting sun.  I also looked back at Exchange Place and noted how sparse the skyline looked in comparison to that of Manhattan. 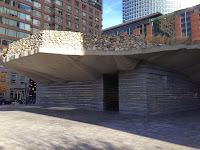 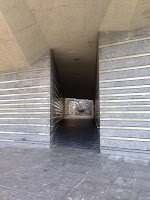 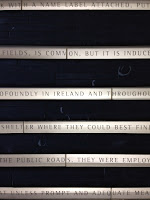 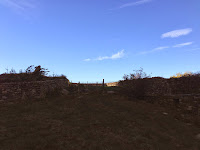 The last stop was a visit to the Irish Hunger Memorial.  This may have been my favorite part of the trip, as it was a very unique architectural experience and something which I had never seen before. It's meant to raise awareness of the Great Irish Famine of 1845-1852 which killed millions due to starvation.  The last picture is an example of how unique this place is - you can frame a photo that appears to have been taken somewhere in the hills of Ireland, yet you are standing in the financial center of the world.

This experience was carefully crafted and I thank Jason for taking the time to put it all together. The short trip made an impression that will last much longer than the hour or so it took in reality. I was able to see new things, revisit old things, and all the while be personally guided by precise narration, intriguing insights, and a general feeling of positivity.
Posted by Abe Rubenstein on Wednesday, November 20, 2013 No comments:

My business card design is quite simple but I think the contrast it creates is quite striking. On the front I used Arial Bold for the letters of my name. I set them off the left side of the card so that part of the letters are obscured. My goal was to make them legible while adding a unique design element to my name. 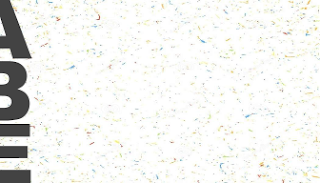 The back features my basic contact information set vertically on the right side of the card. I wanted to match the general aesthetic of the front but use the opposite of the card for contrast. 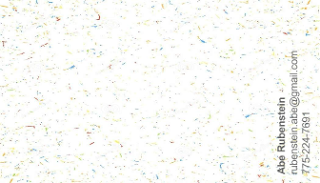 The grainy background is the kind of paper on which I would ideally print my cards.  It has multi-color paper specks that give the card texture.  Also, the text is not black; it is actually a dark gray, as pure black seemed too harsh.
Posted by Abe Rubenstein on Saturday, November 16, 2013 1 comment:

I set my name in six different fonts (three serif and three sans serif) to explore which font styles I prefer. It became clear that I prefer a relatively simple font style, regardless of whether or not it has a serif. Also, I discovered my penchant for large x-heights, as almost all of these fonts have this characteristic, and that my name lacks letters with descenders so it's hard to comment on the baselines.

I really like the third on the list, Big Caslon, because the capital A has a very distinctive glyph with a slant on the top. It makes the first letter of my name stand out nicely. 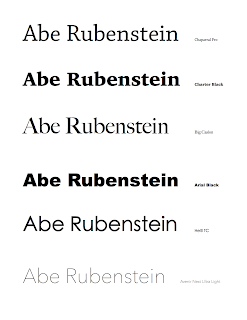 The expressive words were difficult to design but by the third one I felt more comfortable with the idea. I think my fractal-themed word design is by far the best. 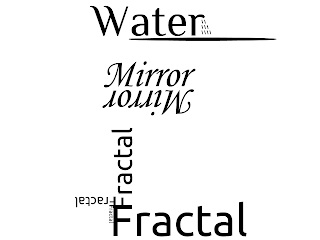 Posted by Abe Rubenstein on Thursday, November 14, 2013 No comments:

My final project (with Yu Ji) is an interactive system that allows a primary user to amplify both their breath and image. The primary user will blow into a sensor controlling one or several fans, and the speed of the fan(s) will mimic the strength of the user’s breath. The primary user’s face will also be projected onto to a screen behind the fan, making the interaction more personal.

The other users (people in front of the screen/fan) will work together with the primary user to make musical tones by putting objects directly in the stream of air created by the fan. The exact interaction and physicality has not yet been decided. 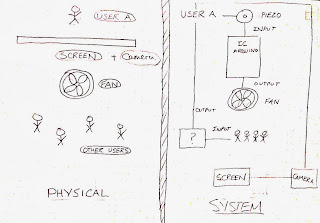 Posted by Abe Rubenstein on Monday, November 11, 2013 No comments:

Success and failure of signage

This week I made a record of signage which I encountered that was confusing, misleading, badly designed, or all of the above.  I found several examples but the ones below are worth further analysis. 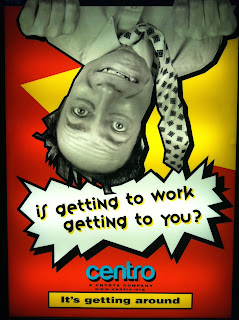 I found this advertisement a few years ago in a bus station in upstate New York. The tagline "Is getting to work getting to you?" isn't that bad but the design is over-the-top wacky. It's clear that the company, Centro, is probably involved in the transportation industry, but there is no additional information and the ad is highly forgettable. 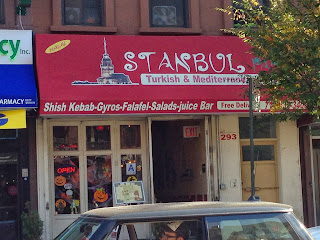 The awning of Park Slope restaurant Istanbul Park Turkish and Mediterranean Cuisine has a potentially great design that is poorly executed. The spire atop the dome in the picture to the left of the name represents the letter "I" but to passerby it simply reads "Stanbul".  The ultra-decorative typeface only serves to distance this text from the "I". Additionally, the full name is "Istanbul Park" but "Park" is in green and obscured by a tree. 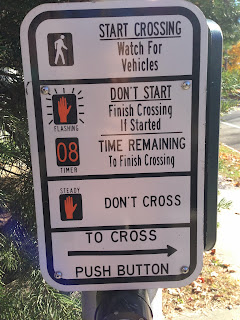 This sign, which I found in Cold Spring, New York, features instructions for crossing the street. However, it seems vastly more complicated than it needs to be. The typefaces, iconography, and layout do very little to guide the reader to any logical conclusion. Because most of us are too familiar with crossing the street to require literal directions, it is easy to overlook this confusing sign.  That's why I chose to redesign it. 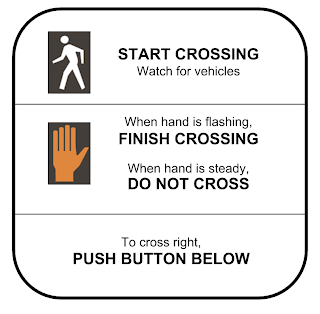 I started by standardizing the typeface (using Arial). Then I eliminated the confusing iconography and verbiage in favor of non-repetitive icons and simple phrases like "When hand is flashing...".  I also included plenty of negative space to reduce the cluttered feeling, and I removed the section about the timer because I felt like a countdown timer is a fairly intuitive thing, given the context.

My design could certainly be improved but I think it's already much better than before. If I continued this redesign I would take a longer look at the bottom section.  There are eight signs per intersection (two pointing to each crosswalk) and perhaps the arrow is more clear that simply "to cross right". 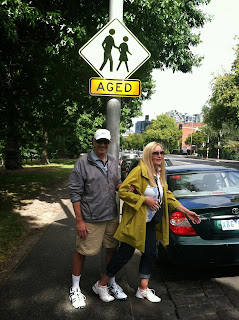 The sign above is one that I like.  It is a traffic sign in a residential/park neighborhood in Melbourne, Australia, warning drivers to watch for aged people crossing the street.  My parents got a kick out of having their picture taken below it, and it has a special place in family stories about our trip there.  It is an ordinary sign, even ugly, but it has sort of transcended its intended role.
Posted by Abe Rubenstein on Wednesday, November 06, 2013 No comments: