We spent most of today's class building basic circuits.  One of the goals for the class to create a zoetrope using a small motor.  My partner and I did not make it that far but we did make a few different basic circuits, including this one: 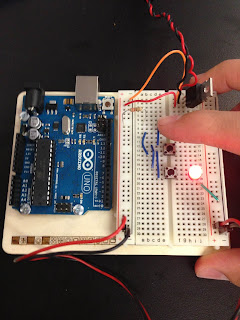 I had mounted my Arduino on the breadboard earlier but it was not used in today's circuits. The active components include:

This is the corresponding circuit diagram: 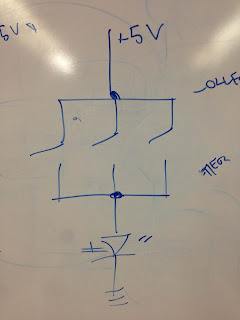 Pressing at least one switch made the LED turn on.  This particular circuit was very helpful in my understanding of the differences between connections in parallel and in series.  A circuit like this can be thought of as an OR logic gate, where it takes just one switch to turn on the LED.  If the switches were instead wired in series, all three would need to be pressed at the same time in order to turn on the LED, as would be the case with an AND logic gate.
Posted by Abe Rubenstein on Tuesday, September 10, 2013