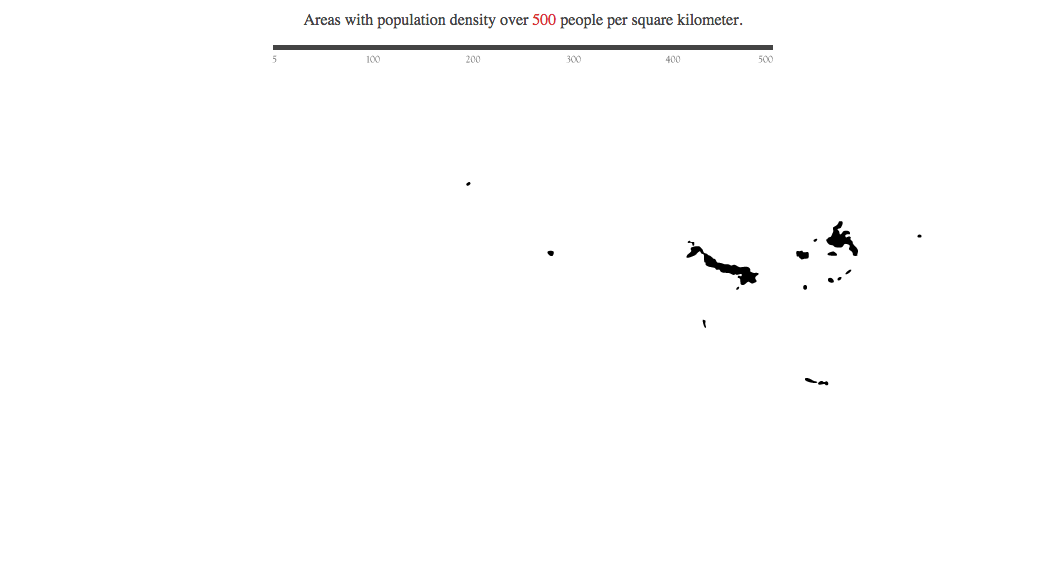 This map shows the world's population density using a slider to move through the various density levels. Viewed at the slider's lowest density threshold, the world's continents are clearly visible. However, when the slider is set at the maximum density, the map is pretty meaningless. Plus, the extreme minimalism and low resolution of this map is very misleading. At 500 people per square kilometer, we should be able to see hundreds of metropolitan areas in the United States (Reno, Nevada is at about 800 people per square kilometer), not to mention plenty of other places in the world.

This map is one of a trend of maps showing local terminology across the country, in this case the names of natural watercourses. Because of the high-contrast visual design, it's easy to assume that the blackout areas either have no corresponding data, or that they don't have one predominant nomenclature. This isn't true, though - buried as a footnote to the map description, the gray and black areas are where the terms "river" and "stream" are most common. This map has essentially removed from view the largest data points in favor of the more uncommon names. I think this was an unintentional result of the visual design, as this map would've been just as interesting.

A clear distortion of the truth
Link: A Texan's Map of the United States

Novelty maps often distort reality for comedic effect. This map does exactly that by enlarging the geography of Texas in relation to the rest of the U.S., mimicking the stereotype of the proud Texan's perception of non-Texan areas as inferior and/or physically smaller. The labels also reinforce stereotypical prejudices of Texans.
Posted by Abe Rubenstein on Monday, September 29, 2014